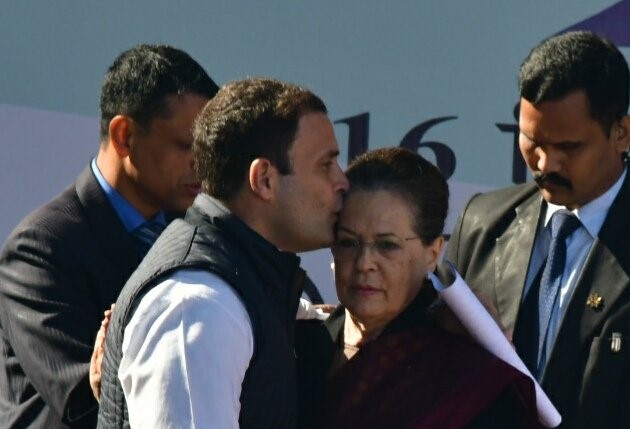 We have variously discussed the destructive effects of dynasty in a democratic polity. As the generation changed in the Congress party today, 16th December 2017, all the ill effects of dynastic succession are captured in this historic picture – of Sonia Gandhi passing on the mantle to Rahul Gandhi. The purpose of writing this piece, however, is not to delve in the same debate again. Instead, for a moment, let us assess Rahul Gandhi on the basis of his Presidential acceptance speech alone, as an individual, divorced from the burdens of his dynasty. Why the acceptance speech? Because this was his and his alone moment in the sun. No pulls and pressures. No diktats from someone else. He alone would decide the contents of the speech and set out his vision.

There are obviously many, many committed Congress party supporters in the country and no amount of  argument would ever convince them to vote for any other party,  leave alone Modi or the BJP.  They genuinely believe in the ideology of the Congress party and their views deserve respect.  This piece is especially directed towards such people.

Acceptance speeches are always important. They go down in history. They are transcribed, translated and disseminated immediately after the speech and for years and decades later. This speech of Rahul Gandhi will also have the same trajectory. Congress party will transcribe the text of the speech in its newsletters, in its party magazines, on its website, in pamphlets – each and every means will be used to make it reach the largest audience base. But what will a reader, who is genuinely interested in Congress party, take out from it?

As a contrast, compare this with one of the similar occassion speeches of Prime Minister Modi. Since there is no equivalent ‘acceptance speech’ of Modi, the SRCC speech in early 2013 is a close approximation – for that is when Modi formally began his national foray on a new slate, quite like Rahul Gandhi today.

That speech of Modi is remembered even almost five years later. For the way he set out his agenda in detail. For how he said he will focus his energies on the three pillars of growth – manufacturing, services and agriculture. For how he will empower the new entrepreneurial class with access to structured financing. For how he will reinvent Made in India brand. For how he will work for the empowerment of the girl child, giving example of how 100% school enrollment was ensured in Gujarat. For how he institutionalized processes – that even though his future as CM was uncertain since Gujarat elections were being held in December 2012, yet the team worked parallelly and ensured that 121 countries participated in Vibrant Gujarat summit in Jan 2013, just 10 odd days after Modi was sworn in again.

Now imagine the take-away a Congress faithful would have after coronation of Rahul Gandhi? What new talking point he would have, in friendly conversations, to propagate his party? That we will show love and not hate? That he is full of ‘pyaar” and not “gussa”? That BJP is uncultured while he is noble? Sitting in protected islands of Lutyens’ Delhi, such one liner rhetoric, on which you can get the faithful in media to swoon, is fine but out there in the country an ordinary Congress supporter would become the butt of unstoppable mirth and ridicule if he would approach with this agenda.  Is it surprising then that why there are so little, if any, proud Congress supporters on social media? Why there are so few who wear their support on their sleeves as the BJP supporters do? Or why most of those who are Congress supporters couch themselves as neutral citizens or activists for one obscure cause or the other? Or why they paint themselves as apolitical, not wanting or willing to carry the burden of being identified with Congress or Rahul Gandhi?

Would such ‘apologetic’ Congress supporters ever be able to accrue more supporters to their side? Who among the Congress party ordinary supporters would go out and defend and propagate the beliefs of their party every day?

What the Congress party in general and Rahul Gandhi in particular have not learned is that the country has changed permanently. It no longer will be satisfied with empty, meaningless rhetoric, coined by the latest film star in the good books of the party. Social media has additionally ensured that the citizens educate themselves directly and the role of middlemen media, who you could corrupt to project yourself, has been rendered irrelevant.

The problems with  the speech of Rahul Gandhi is not incidental. They are systematic. As the generation changes,the dynasty invariably becomes more incompetent. It is bereft of any new ideas of policies. It has no vision for the future. No policies for the present. No commitments and beliefs of its own. No unshakable fundamentals that it would never compromise. All it has, is to cling on to its past glory and the tired rhetoric of mediocre image makers. Rahul Gandhi is an important person in the history of India. We are lucky to be in the same time and space as him. For we are witnessing in live motion, how dynasties eventually implode and fade away in the sands of time.

3 thoughts on “Meaning of Rahul Gandhi – End of Dynasty”