Sanjiv Bhatt has a  controversial history. He is an accused in custodial torture and murder. He is also an accused in planting of evidence (narcotics in the car of the victim) against a person who was not liked by one of his friends. The Human Rights Commission reprimanded him and ordered compensation to Bhatt’s victim. More recently, the Special Investigating Team (SIT) constituted by the 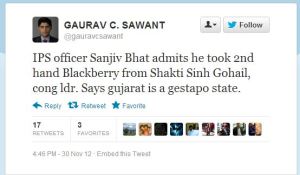 Supreme Court of India has accused him of submitting false affidavits in Supreme Court (a criminal offense) and of forging Gujarat State IB reports (also a criminal offense).  Accusations have always been rife against him that he was acting as a Congress party agent when he tried to post facto inject himself into a 2002 meeting through time travel. On a TV show today (30th November  2012), Bhatt confessed that he was in regular touch with Congress leaders during his sudden burst of memory and in fact got a second-hand Blackberry for his services !

What has generated the latest controversy is the decision by Bhatt’s wife to enter the electoral fray and whether it is right for a relative of a serving IPS officer to contest elections?  While as a citizen, Shweta Bhatt has absolute right to contest elections, the questions have been mostly asked of Sanjiv Bhatt 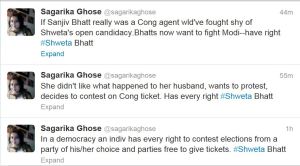 and his ethics. Sagarika Ghose, the ruling diva of intellectual classes in India, pitched in with the following formulation on the controversy (adjacent picture). The important take away from what she is saying is this: Shweta did not like what happened to her husband ( a serving IPS officer) and thus the “Bhatts now want to fight Modi”. What happened to Bhatt? The trial in a custodial torture case of 1990 has started recently. Presumably this is what Shweta did not like. So she has decided to protest. But not her alone. The “Bhatts” together have decided to take on Modi for this slight. How? By contesting an election and they have a right to do so? But do they?

Sanjiv Bhatt is an IPS officer. Among other things, he is governed by the All India Services (Conduct) Rules formulated in 1968.  Below is an extract of what they say on taking part in electoral process and participating in elections :

5(1) No member of the Service shall be a member of, or be otherwise associated with, any political party or any organization which takes part in politics, nor shall he take part in, or subscribe in aid of, or assist in any other manner, any political movement or political activity.

5(4) No member of the Service shall canvass or otherwise interfere with, or use his influence in connection with, or take part in, an election to any legislature or local authority:—

Explanation— The display by member of the Service, on his person, vehicle or residence of any electoral symbol shall amount to using his influence in connection with an election, within the meaning of this sub-rule.

[ Fact : Sanjiv Bhatt has since been on various TV channels TOGETHER with Shweta Bhatt arguing for her and presumably canvassing for her – after all, why else would he be on TV with a candidate for a political party? ]

In the coming days, it will be interesting to see how the Election Commission, DoPT along  with MHA (under whom Bhatt serves) looks at  his conduct.  But what will be more interesting is to track the take various defenders of Bhatt – for example, they might say that he is entitled to flout a few rules as long as he is challenging Modi ! If only they had chosen to back a man of more self-worth. I mean, just for a second-hand Blackberry?

Notes: The full THE ALL INDIA SERVICES (CONDUCT) RULES, 1968 can be found here .

23 thoughts on “Can Shweta Bhatt contest?”