Mumbai mirror (part of the Times of India group) carried a very significant news, on 15th September 2012, on the Coal block allocations scam. As per Lakshmi Iyer, who wrote the Mumbai Mirror article, Prime Minister Dr. ManMohan Singh, in a meeting with Mrs. Sonia Gandhi,  laid the entire blame on Ahmed Patel’s door for the coal scam that has engulfed the Congress party.

Who is Ahmed Patel? If we were to believe Lakshmi’s account of what Dr. Singh told Mrs. Gandhi, Ahmed Patel was the middleman between the Coal block allottees and the Congress party.

Consider a housewife living in a posh colony in South Delhi. Like everyone else, her family too eats vegetables. Where does she buy her vegetable from? The local thelawala, who every morning ferries the vegetables in the colony she lives,  is her trusted vendor.

One particular day, she reads all these tweets from Economics experts ( and non Economics experts too) that FDI in Retail is coming and it will eliminate middlemen between the farmer who produces the vegetables and the consumer like her. She too has read Lakshmi Iyer’s article and obviously thinks middlemen are evil. Determined to find out the evil who was raking in the “mota maal” at her expense, she does some research. To keep things simple, she chooses the humble Onion and promises to herself, that she will unleash the might of the peeled onion on every middleman she discovers. This is what she finds (figures in braces are the value in INR at which rate the Onion is sold at each stage) :

Flushed with the success of her research, she logs on to Twitter and shares the results of her research to her network of “followers”. A frenzied discussion ensues. Suddenly one expert notices her tweets, does a quick calculation and then tweets this:  “This is why FDI in retail is necessary – Walmart guys will pay Rs. 8 to the onion farmer & sell you at Rs. 25. Is it not a win-win for both?” 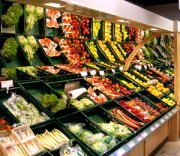 As she was digesting this new information, some crazed right-wing fanatic re-tweeted the Laxmi Iyer piece on Ahmed Patel and it appeared on her timeline. Things reverberated in her head. End of middlemen she screamed. Let FDI in Retail come.

Somewhere in West Delhi, a 14-year-old son of the Azadpur Sabzi Mandi Retailer was  also reading these tweets and wondering if his father is a middleman as they are alleging or an honest man as he all along thought?

The Economist, while honoring Sam Pitroda in 2006, said this in the citation : “In 1987 Mr Pitroda was asked by Rajiv Gandhi, the Indian prime minister, to help democratise access to telecommunications. His response was to deploy instantly-recognizable yellow telephone kiosks in every town and village. In the process, he helped to release the Indian telecoms industry from state control and opened it up to dozens of private companies, paving the way for India’s telecoms boom.”

in the twenties or early thirties. Otherwise largely unemployable, these young men, filled with an entrepreneurial zeal, took to this reform measure literally like fish takes to water. Men, who would otherwise have continued to like the angry young man, and perhaps become like him, now had a living to earn and families to support.

But who really were these men? Middlemen between two sets of people wanting to converse?

Technology  marches relentlessly. Sometimes affecting tectonic shifts. A new government in 1999, under the Prime Ministership of Atal Behari Vajpayee, was fine tuning the new Telecom Policy. Little did they know that they will fundamentally change the way people of the country conversed with each other. Within half a decade, the middlemen in the yellow kiosks were feeling the heat. They had to evolve and innovate or they will soon be history. Advent of cheap mobile telephony made yellow kiosks middlemen redundant, at least in the cities.

As Sam Pitroda was getting the award from The Economist in 2006, on behalf of the middlemen he had unleashed in 1987, he could not but have wondered on their present fate.

2006 was also the year when another set of middlemen were being minted. We now use the collective noun, Raja, to denote these middlemen.

Ludhiana is the hub of hosiery, apparel, and garment manufacturing  in North India.  Karol Bagh in Delhi, one of the largest market for these produces. Madan Hosieries is one of the most famous garments shops in Allahabad.

Every week, a designated member of the family running Madan Hosieries, along with a few trusted employees, travel to New Delhi by Prayag Raj Express. Their destination – Karol Bagh. They shop all day, barely managing to complete all their required purchases just in time to catch the return Prayag Raj Express the same evening.

Between the hosieries of Ludhiana and the end consumer in Allahabad, there are dozens of middlemen who are people like you and me. Making an honest living. People in their mid twenties and their mid fifties. People who have no expertise in life other than running a retail shop. People who support large families based on the earnings from their retail shops. People who sell garments in Patna to people who sell groceries in Satna. People who are consumers for one product but middlemen for another. Who do we eliminate and who do we protect?

Various estimates have been put forward on the number of people employed in Indian retail – the most common number being 50 million.  Extrapolating that with the average size of an Indian family³, that is close to 200 million Indian people directly dependent on retail as only source of their family earnings.

As organized retail, propelled by foreign funds,  rolls out many of these people will be put of job. Some may reskill themselves and find employment in these super marts that will soon dot the landscape. But what about the others? Where will they fit in the supply chain? Will the person who managed the supply chain of Madan Hosieries be thought fit to be employed or a professional degree holder in supply chain management? How will people in the forties and the fifties reskill themselves?

t. The producer will get more for his produce. The consumer will get it cheaper than what she is now getting at. The multiple ordinary middlemen will be gone.

Of course we will have one ubiquitous middleman. The super mart.

Unshackle the chains of state over human entrepreneurship and people invariably innovate. Milind Amte owned a yellow kiosk. The advent of cheap mobile telephony did perturb him for a while. But then, he innovated . As the Times of India reports in this piece, Milind is adjusting to the new realities by offering additional services in his PCO.  He in fact has a possible bright future in the all India roll out of 3G services.

The march of economy is relentless. One can either fight it or can learn to ride it. The middlemen of Indian retail will have learn to ride it. And they will do it too. After all they are people like you and me.  They are not Ahmed Patel.

1. Azadpur Sabzi Mandi is one the largest vegetable markets in North India, hosting vegetables and fruits from states like UP, Haryana and Punjab.

3. The average size of an Indian family is larger than 4,  as one may erroneously conclude from the figures quoted above. Invariably however, multiple members of the same family work in the family owned retail business. Therefore there is an overlap in number of people employed and dependent on retail.