CAG submitted a report on methodology of coal blocks allocation followed by Congress led UPA government in May 2012. It was placed in Parliament on 17th August 2012. CoalGate had arrived in Indian lexicon.

12th September 2012, that is 2 days before this post is being written, Mulayam Singh Yadav called up Mamta Banerjee and pleaded that let bygones by bygones.  The reference was to Mulayam ditching Mamta in the Presidential elections earlier in June 2012. Not just content with a telephonic conversation, Mulayam sent his son, Akhilesh Yadav, to personally meet Mamta. They had a 45 minute cordial meeting.

On 14th September, SC admitted a PIL, despite strenuous objections by government solicitors,  questioning the coal allocation policy by Congress government. Every plea that was adopted by Congress so far, with help of friendly media, was rejected by the SC as it issued notices to the government as to why the allocations should not be cancelled?

Stung, the media headlines, which have been frequently been about setbacks to BJP, suddenly became “Setback for Centre”.

Just a few hours earlier 51% FDI in Multi Brand Retail and 49% FDI in Civil Aviation had been cleared by the Union cabinet. Just a day earlier, Diesel Prices had been raised by Rs. 5 / ltr.

The Circus and the Audience

There is still no unanimous view as to what caused the surprise electoral victory of Congress in 2004. However, there is  almost near unanimity about 2009. The urban middle class was enthused by Dr. Man Mohan Singh, who was protected as having stood on the side of the nation during Nuclear Deal standoff.  This enthusiasm was not without electoral relevance. Congress swept almost every city in India. Delhi, where Dr. Singh could not win a seat for himself in 1999, voted 7-0 in favor of the Congress (In 1999 it was 0-7). Such was the mood. And who built this mood? The media – which shouted “Singh is King”.  Nuclear Deal was projected as the panacea of all India’s power ills. Dr. Singh was the man who stood for it. The evil BJP, against it. So what if the Dr. Singh won a tainted confidence vote? After all, he secured India’ future. BJP had no counter to this media projection. Dr. Singh had the last laugh.

Zoom to 2012 and CoalGate. For the first time, Dr. Man Mohan Singh, who was overseeing the most corrupt government in independent India, was in the dock himself. Till now, he had avoided direct culpability despite humongous losses in 2g, CWG and other scams. CoalGate changed all that.

The basis on which urban India was won in 2009, was fast slipping. The Man Mohan Singh cloak was being stripped each day, and the real face of Congress was being exposed for all to see. When it comes to Congress vs BJP at national level, there is a block of minority votes which will always go to Congress, irrespective. What gave the Congress the winning edge was additional rural voters added through schemes like MNREGA and urban votes that Dr. Singh commanded through his image. It is presumed that RTE will secure some marginal votes this time. However, the urban votes are now almost completely lost, or so is the assessment.

With SC getting into the act on CoalGate, the possibility of the highest judiciary of the land commenting adversely on role of Dr. Singh, a prospect not faced by any other Prime Minister,  is now real. With Mamta and Mulayam coming together, days of Dr. Singh looked numbered. He could go down any day in an ignominious way with taint of CoalGate stuck on him for history.

Dr. Singh did not have thoughts of reforms while announcing FDI. All his thoughts were on avoiding going down in infamy. But go down he will. For looting India  through their 8 years of disastrous rule. For making the India story into India nightmare. But every politician is allowed his role of the dice. That is what democracy is. This is the role of dice of Dr. Singh and the Congress before they go down. And how will it play? 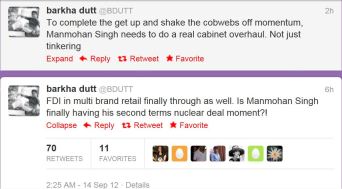 “So what if a few corruption allegations have been made, Dr. Singh is promising India’s future through such bold reforms.” Friendly media will spin various variants of this theme to the urban middle class voters who had moved away from Congress due to a deluge of scams. Day in and day out. 24 X 7.   Just as they did during  the time of the Nuclear Deal. It is a different matter, that Nuclear Deal, 4 years on, has yielded close to zero minus benefits.  Same could be fate of FDI in Retail. But who cares? This is a roll of the political dice. The battle for perceptions. To paint Dr. Singh as a reformer, who slept for 8 years, but so what? At least he is reforming now. Give him another chance, Dear Indian urban middle class voters, will you? Rural voters will be lured by another wasteful scheme, even grander than MNREGA. All bases covered?

Game Theory is a fantastic discipline to study. Prof . Gomez  of University of Washington defines it thus : “It is the study of strategic interaction, by which we mean, situations where players have to think about the actions of others and how they are going to affect their payoffs.”

One of the variants of Game Theory is a  Rigged Game, where the game looks fair to all the participants wanting to play, but almost invariably, only one player wins. Military planners use it. Politicians know it. Media practices it daily in the “fair debates” they hold on issues.

A player must know the pitch he playing on else he will become a player in a rigged game. A cricket batsman does not play by baseball rules. FDI in Retail is a decision on a “political pitch”. It can be played either on “political pitch” or on the “merits of policy pitch'”. The pitch of “merits of policy'” on which the media and the Congress so dearly want BJP to play, is a rigged game. Every which way the BJP will lose. Some BJP supporters are already falling for it.

FDI in retail must be replied to on the “political pitch” by BJP.

9 thoughts on “The FDI in Retail stunt”